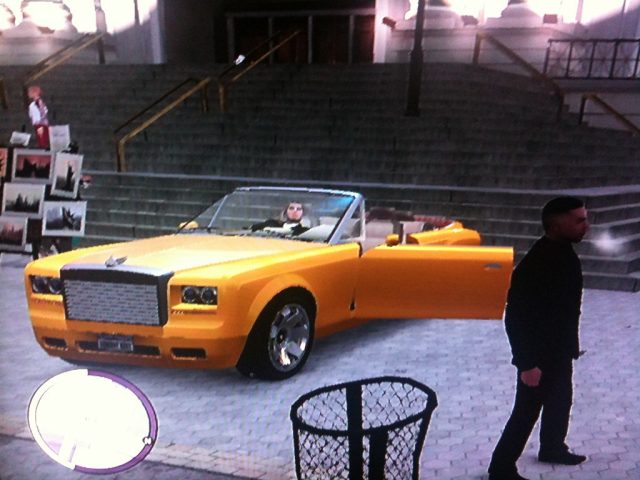 Design of Toreador in GTA 4

In addition to its wedge-shaped profile, narrow front end, four-door layout, and greenhouse area, the Toreador is derived from Lamborghini’s Marzal concept car. The headlights, however, mirror those of the Aston Martin Lagonda. Lamborghini Espada and Lamborghini Urraco have also influenced the car’s design in minor ways.

The Toreador is a 4-door sports car designed in the 1960s, with a narrow black plastic bumper and a small lip in the middle of the front end. Under the bumper are two rectangular high beams and a central intake, while above the bumper are four headlamps installed on the inner side and two amber signals. With an inset profile leading to a narrow air intake near the windscreen, the bonnet exhibits a slanted shape on the front end, with the manufacturer emblem visible.

In addition to flared arches on the front and more minor bodywork extensions on the rear, the car’s sides demonstrate a more luxurious approach, having chrome details running through them. The most notable features of the vehicle are its three-part gullwing doors the chrome side handles. The two small air intakes on the rear doors, with the lower intakes directing airflow to the rear brakes and the more oversized upper intakes running air to the engine bay. Glass ceilings, and a curious lack of B-pillars characterize the greenhouse area. Chrome trim surrounds the windows, while a chrome detail adorns the A-pillars. Almost the entire width of the rear section consists of black slatted vents.

It has a slanted profile and is equipped with a large mesh vent that houses the license plate and includes a silver nameplate above it. Moreover, a large tail light unit is equipped with red upper lights and red lower lights for turning and reversing. The underside consists of a carbon-fiber plate and a black plastic bumper with a similar profile to the front bumper, while the sides feature dual exhaust exits.

It uses an inset driver-side dashboard portion and has a wood backing and chrome trims around the panel and the dials, almost everything from the Gauntlet Classic. It is the same “Dominator” dials prominently featured on several classic cars. Still, the central dials are arranged beside the steering column, and the gauges are set in the middle of everything. You can see rectangular air conditioners on the passenger side, while the company logo appears on the steering wheel. You can also see a badge for Pegassi behind the back seats.

As with the Stromberg and the Deluxo, the vehicle can be switched between car and submarine modes at any time. There are various functional components in the car that appear to lack fully-rendered spaces of storage; when they are stowed, they disappear entirely into the bodywork.

A car transforms into a submarine by retracting its wheels, removing its exhaust system, repositioning its wheels and covering the wheel hubs, extending the tail light housings backward, unfolding two side fins from its bodywork, and extending two more from the tail light accommodations, along with the cased propellers from the bottom of the rear end. The wheels are deployed, and the hubs are uncovered as the submarine transitions to a car while the propellers are retracted. The bodywork of the car and the tail light housings of the car are retracted to rescind the respective fins. In addition, the exhaust tubes are pushed forward to reveal the tailpipes.

On the upper bodywork of the car, the primary color appears, while the second one appears on the lower/bottom part. An interior trim color door card and seat color are also available. The rim has a unique design that consists of five long open slots on the outside and five smaller ones on the inside, the center being taken over by a knock-off hub cap. In addition to two machine guns mounted on the bonnet, the vehicle is equipped with missile/torpedo launchers hidden behind the central panel. They are opened when the launchers are selected.

The Toreador’s handling and speed are fair, but its acceleration is average. Los Santos Customs and vehicle workshops can improve this aspect at a cost. Additionally, it has good handling and cornering capabilities, but the rear-wheel-drive layout can make itself felt occasionally with slick handling. It will not fail like other land vehicles if left in car mode when entering the water, but it will be hard to control since it is an amphibious vehicle, so it is imperative to change into submarine mode. However, a lost driver’s door makes the car vulnerable to water, resulting in its destruction. While they are not bulletproof, the windows of the vehicle are shatterproof. The overall performance is similar to the Stromberg.

Read More: Everything You Need To Know About How To Make A Repeater In Minecraft?

The vehicle can be switched from car mode to submarine mode in approximately four seconds by holding right on the D-Pad or H on PC.

Performance is average when operating in submarine mode. Submersibles and Krakens have a faster forward speed, but surface speed boats still have slower. Its ascent and descent rates are faster than other submersibles, but it can only be accomplished by pitching its nose and using forward momentum. Unlike other submersibles, the Toreador does not have raise and lower controls, as its weapons control these. There is a compassionate rudder response. Attempting to turn sharply underwater will cause the car to momentum-drift noticeably.

Damage can result from collisions with the seabed or underwater vegetation, and the vehicle will eventually be destroyed (and potentially, the occupants will be killed). If equipped with Scuba Suits, the vehicle is submerged to a depth of 500 feet (0.11 miles), and its occupants will be killed by water pressure. When breaching the surface, visibility is poor, and there is a risk that the vehicle will get stuck on terrain, and either land mode or submarine mode won’t be able to rescue it. A vehicle needs to be abandoned on foot for the garage mechanic to pick it up or pushed by other nearby vehicles/boats.

Toreador’s boost works similarly to Rocket Voltic and Oppressor’s booster turbines, making it slightly superior to Stromberg. It propels the car for approximately a second and recharges relatively quickly at about one second. The vehicle accelerates speedily or maintains speed better than most cars (however, it is still inferior to the Vigilante in that respect). Additionally, the booster can operate underwater, superior to most naval vehicles.

Players who own a Kosatka and the optional sonar station can use the sonar function while on the water with the Toreador. You can collect Hidden Caches every day in the Toreador by pressing the sonar button.

According to its defense, it takes six homing or 2 RPG rockets to explode the Toreador, making it similar to the Stromberg but not as good as the Deluxo. However, because of the limited lock-on range of the homing missile, it is highly vulnerable to close high-angle air attacks. However, it is still deadly once it is locked onto a target.

Like most vehicles with similar design layouts, the Toreador provides some protection against targets from behind. No matter how strong the windows are, the occupants are left unprotected. Furthermore, the glass roof makes the occupants vulnerable to enemies from above, such as Police Mavericks pursuing them.

Small Business Loan Or Personal Loan: Which suits you best?