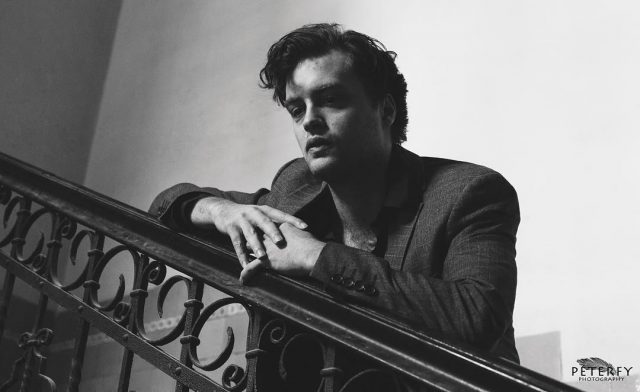 As with most contemporary counterculture fashion, the beatniks had their look. The general idea was to express freedom and detachment from society. This meant avoiding all “conventional” articles of clothing at the time, namely suits, t-shirts, jeans, etc.

Instead, they wore either turtleneck sweaters or mock turtle necks under black leather jackets, slacks that were always pegged tight below the knee, desert boots (or sneakers), berets, trench coats, sunglasses, dark thick-framed glasses with clear lenses, scarves tied around their necks and sometimes hats. These items were deliberately chosen to make them stand out and appear as different as possible from everyone else.

Aside from these signature elements, the beatniks also favored wearing items that were thought to be “old-fashioned” or out of style at the time. For example, they wore suspenders, lightweight cardigan sweaters (usually white), tweed sport coats, vintage 1950’s bowling shirts, and blazers with gold buttons. These were typically teamed up with baggy pegged pants worn below the waist. They preferred to wear black socks instead of colored ones, but it was only in pink or navy blue if colorful ones were worn.

The beatniks’ overall dress style can be broken down into three main categories; workwear, casual wear, and formal wear. It would be wrong to think that all beatniks dressed the same way. This was not true, and in fact, there was a high degree of variation in the way they dressed. However, generally speaking, this is how their dress style can be summarized:

In general terms, the workwear consisted of black pegged pants worn with either desert boots or sneakers. They wore a lightweight white cardigan sweater or a slim-fitting polo shirt tucked into their pants. Sometimes they would wear a dark-colored v-necked pullover instead of a cardigan, depending on the weather. More often than not, it has to be said they preferred wearing denim because of its comfort though you could see them wearing navy blue slacks on rare occasions.

The jackets they would usually wear were either black or brown leather, and they would always have a beret or a fedora perched on their head. If it were colder, they would add a scarf to their outfit.

Beatniks would often team up jeans with a white t-shirt or a lightweight v-neck sweater in casual wear. They are accessorized with sunglasses, dark thick-framed glasses, scarves around their necks, and hats (usually berets). As mentioned earlier, they preferred to wear dark socks, but sometimes you could see them in bright pink or navy blue socks. Their jackets were typically leather bomber jackets, and the footwear of choice was desert boots or sneakers.

Beatniks would often ditch the jeans and t-shirt combo in favor of a more tailored look in terms of formal wear. This might include a light-colored tweed sport coat worn with a white dress shirt and striped tie. They would usually complete the look with black dress pants and desert boots or shoes. You could also see those wearing blazers with gold buttons as well as waistcoats.

As with any fashion style, it is essential to consider your body shape and personal preferences when replicating the beatnik look. What might suit one person might not suit another, so it is important to experiment until you find what works best. You should never feel like you need to buy all the items down to the exact type and style because it is unnecessary. Instead, choose things you like and can afford until your version of beatnik fashion feels right on you.

Here are some tips for dressing like a beatnik:

What is connected packaging?

Everything you need to know about powder coating finishes