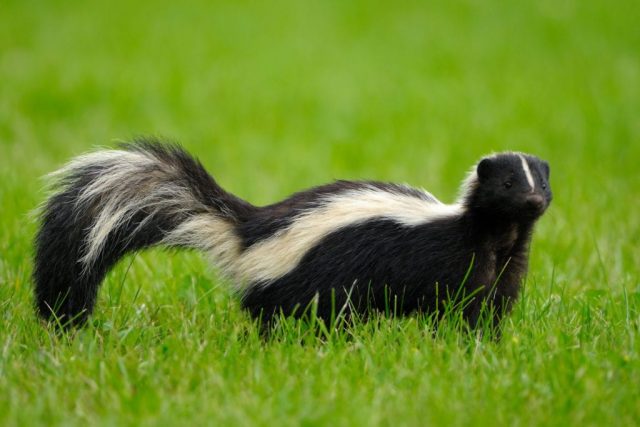 Skunks are mammals known for the ability to spray a noxious fluid from their scent glands.

Skunks are opportunistic, and omnivores and their diet vary with food availability. Their mouths contain 28 teeth, and like other mustelids, they have very sharp claws designed for digging. They have predators such as foxes, coyotes, badgers, eagles, hawks, owls, some domesticated animals, and humans.

How skunks save themselves against predator?

Although these mammals possess a powerful weapon against predators, it is ineffective unless appropriately used. To use the scent glands effectively, the skunk must turn its back toward the attacker, lift its tail to expose the glands, and then quickly turn back toward the attacker, spraying them with a fine mist of foul-smelling fluid. When under attack or frightened by predators, it raises its tail straight up to avoid spreading an enemy.

The skunks’ scent is strong enough to ward off bears and vicious dogs because of their powerful musk glands, which contain about 1/3 ounces of fluid. The Hog-nosed Skunk has a unique adaptation against large predators – at least three oozing poison glands are located near its anus instead of one like other skunks. This increases the chance that at least one gland will be able to squirt an assailant if attacked.

Read More: What is Garage Floor Drain, and How to Install a Floor Drain in Your Garage?

How to get rid of Skunks?

The best way to get rid of skunks is to prevent them from coming around in the first place. If you have a garden or compost, put chicken wire around it so they can’t get in. If you know where they like to den, block off that area with chicken wire too.  If you live near water, fencing might not work because there are usually burrows along the bank. You must physically plug up all their access areas- no holes left unsealed!

Skunk babies (kits) cannot leave the den until they are about six weeks old and their mother will defend them fiercely, so make sure you do NOT seal up the shelter if there are kits inside (you can tell if there are kits inside because the mother will stay near the den, and she only comes out once a day or so to hunt). Also, if it’s cold outside, do NOT seal up the shelter. Let them come out when it warms up in springtime.

If you’ve already sealed up all their access areas and put some fence around your garden/area they were getting into- and you still have skunks coming around, then it’s likely that some of them aren’t leaving after dark as they should be.  This is especially true if you notice skunk tracks on your porch (and possibly a trail leading away from your house) one night, but there are no new tracks on subsequent nights. If this is the case, you have a colony of skunks living under your house. The only way to get rid of this problem is to trap them and remove/relocate them physically.  You have to do it quickly before they settle down into a new den site for this Method to work!

Other methods might be helpful if all else fails: one thing that will keep skunks away from an area but won’t harm them or their young is blood meal sprinkled around the perimeter of the place they’re getting into. Another option is mothballs- buy some naphthalene flakes (the stuff inside those yellow balls) and spread it around as you would with blood meal. Just make sure there aren’t any babies inside before you seal off their access areas! Also, if they’re coming around looking for water, be sure to keep it covered (skunks can’t climb).

Step 1: Identity what’s attracting the skunks. Skunks are attracted to food. Clean up any garbage or spills you have lying around, and try making your compost pile less attractive for them by burying it deeper under your soil. If you feed pets outside, clean up after them so they don’t attract other pests like raccoons that might also attract skunks.

Step 2: Deter the skunks from hanging around your yard. You can try sprinkling cayenne pepper or black pepper on places where you’ve seen the skunk before, which will sting their nose when they sniff at it, but you have to reapply this stuff every day.

Step 3: Trap the skunks in your yard. This will be a matter of trial and error; there are many types of traps, some more humane than others. You can find live traps at hardware stores or online, but these can be costly (from $30 to over $200 depending on the size), and you’ll probably need two for a big skunk (if one trap is full when another skunk comes along, it might just get scared off). Lethal traps are widely considered inhumane by animal rights groups, but if they’re your only option, deadly traps are sold at hardware stores for under $20, or you could build one yourself. If you go this route, remember that pet dogs and cats are at risk of being caught in these traps.

Step 4: Relocate the skunk. The Humane Society has a good page about relocating skunks, but it won’t be easy. Skunks can travel long distances, so you’ll have to keep an eye on any traps you set up and transport the animal a great distance away from your home (at least ten miles). You can check with your local fish and game department to see if there are any areas in your state where it’s legal to relocate them.

Why does my pet skunk stink?

It is important to note that your skunk with its natural musk is not stinky in and of itself. It’s just a natural scent that skunks produce, and in fact, many people find it pleasant. However, when the scent glands are removed or mutilated through forced anal gland expression or having them drained by an unqualified person, this will cause your pet to become offensively smelly.
This often leads to people no longer wanting their pets and selling them for money or abandoning them at shelters where they will likely be euthanized due to their foul odor, which makes this one of the cruelest things you can do to a skunk. Anal gland problems aren’t always a result of poor care either. Sometimes a skunk’s gland can become impacted from eating something it shouldn’t have, or it could be sick with an infection or other illness.
Several products on the market claim to keep your pet smelling fresh, but many contain harmful chemicals. They should not be used around your skunk as they can cause irritation and stomach upset if ingested directly and damage the liver if exposure is too frequent. Some people opt to use activated charcoal or baking soda, which helps remove odors for short periods. Still, these methods won’t stop smells from becoming overwhelming if proper care isn’t taken to prevent them in the first place.

Most Impactful Benefits of Guest Posting

All About Custom Boxes: Why People Prefer Them